A Ski Weekend in Swiss Heaven

The Swiss ski resort of Engelberg claims to be heaven on snow but what does the hardcore off-piste resort offer for the on-piste skier?

There's a piste map on the wall of Ski Lodge, the hip, Swedish-run, hotel and bar in Engelberg that's been personalised with the best and the rest of the off-piste hot spots in the Swiss resort.

Tree runs, cliff drops and wide open bowls all marked alongside the legit' pistes with comments like, "at this point your legs are most likely burning", "steep skiing" and, "playground". It's the kind of thing that gets powder hounds fawning at the thought of putting on their fat skis and heading for the hills, without looking back. 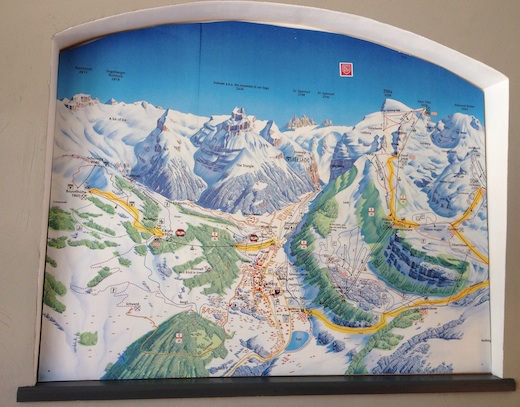 But for a powder-shy skier, who has recently transitioned from snowboarding (where the back-country was the only country), the 'Mountain of Angels' presented me with a problem - was there enough piste skiing to keep me amused, or does the scope of this steep and deep resort not really stretch to the slopes?

Engelberg, in the Swiss Canton of Obwalden, has been on the winter tourist map since the beginning of the 20th century, when the first ski lifts were built. In 1913 one of the first mountain funiculars, designed specifically to transport people for winter sports, was opened and so the town, which lies at the end of the Engelberg Valley, was established as a ski destination. A short and very convinient two-hour train journey from Zurich it's a great resort for a short break.

Surrounded by breathtaking mountains and bizarre rock formations it boasts an ever increasing list of superlatives - the resort has the world's first rotating cable car, and is now the home to the higest suspension bridge in Europe. But the biggest and best of all is Titlis mountain, the highest point in central Switzerland, which at 3239m towers over the resort. This majestic mountain is the reason that Engelberg is on every skier's hit list - low pressure systems loaded with snow make their way from the North Sea, hit Titlis and dump tonnes (and tonnes) of powder Engelberg's slopes - the upper piste depth in mid February this year was 500cm.

Hardened back country skiers take on Engelberg's Big Five - five off-piste runs (all marked on 'that' map: Kleine, Laub, Galtiberg, Große Sulz, Laub, Steinberg and Steintal) , which when you combine their vertical descent (around 30,000ft) you'll have skied the equivalent of Everest.

On the piste and the terrain is equally as challenging - there are few cruisey blues and even if you don't like speed you'll be forced to embrace it: between the summit of Klein Titlis at 3028m and the mid station near the lake at Trübsee there are a dozen sharp, steep and challenging reds. The Trübsee, a comical chair lift that, rather than going up a mountain crosses (at about 5m high) a lake, links the Titlis area to Jochstock where there are a couple of token blues. Fast and furious is still the order of the day, though, and the majority of the pistes here are reds and black, until you hit the wonderful tree-lined Kanonenrohr, which takes you right back to the base. 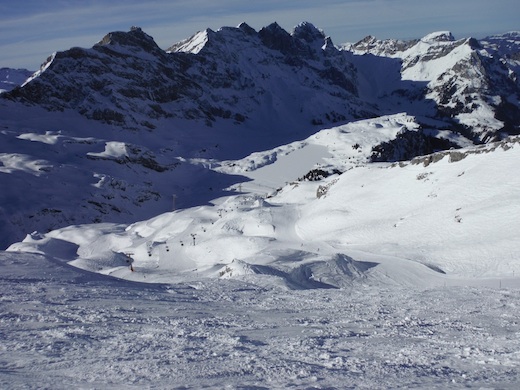 Engelberg's gem, however, is Titlis's small but beautiful sibling Brunni, a sunny ski area which faces the mighty mountain, just north of the town. Here, albeit on a seperate lift pass, was my kind of heaven. With the mountain to ourselves we sessioned red, blues and blacks all basking in bright, Alpine sunshine. By 11 am a few more skiers had joined us but, unlike on Titlis, skiers were still just peppering the slopes, rather than drowning them.

This quaint, quirky, south-facing ski area, accessed by a painfully slow cable car which stopped to pick up an elderly lady from a tower half way up, is an beginner and intermediate's paradise but also offers some incredible off-piste, as well as a 2.5km-long toboggan run.

The summit, Schonegg, is almost 1000 metres lower than the highest ski area on Titlis and you have to brave an ancient Poma lift to get to the top, but skiing here was near perfect. In fact it was so quiet that, along with the absence of lifties, at times we felt like we were trespassing in a private ski resort. 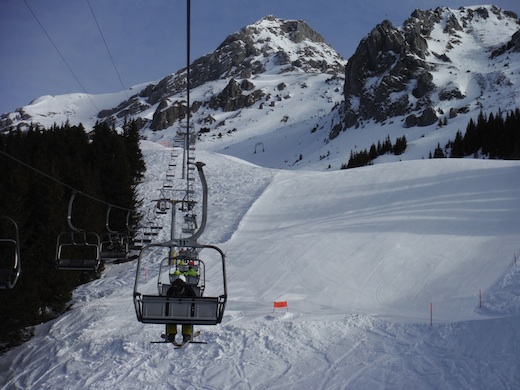 Back in the town and over coffee in the super cool bar of the Ski Lodge, where you're surrounded by piles of old ski books and retro ski posters, I returned to 'that map'. Brunni, Engelberg's baby sister features only once - there's thumbs up for the Flühmatt restaurant which makes, "the best rostis in town". Put it like this if Titlis is Engelberg's Yang then Brunni is its understated Yan. Put them together and you've got a rather good resort .

Ski Solutions (020 7741 7700) offers short breaks to Engelberg (Thursday – Sunday 4 night) from £610pp based on half-board accommodation at the three-star  Hotel Terrace, including flights with Swiss from Heathrow (inclusive of ski carriage) and rail transfers to Engelberg.

For more information on Engelberg: engelberg.ch