Oli Lynch heads to Slovenia’s capital, Ljubljana for the perfect long weekend on the mountain pistes and in the city streets.

The perfect place to escape to for a few days of snow and sunshine is in the Alps - but not quite where you might expect. Slovenia’s gorgeous, laid-back capital, Ljubljana, is just a two-hour flight from the UK, and makes for a relaxed city break. It also happens to be right next to the Julian Alps, which dominate the western side of the country and are home to no less than 49 ski resorts. When I heard that the Slovenian resort of Krvavec, which boasts the shortest airport transfer time in Europe, was just 15 minutes away from Ljubljana airport, I had to check out if it was possible to have breakfast in London and be snowboarding in the mountains before lunch.

I leave rainy London in the early morning dark, and by 11am I’m perched high on Mount Zvoh, at 1,971 metres the highest point of Krvavec ski resort. I look out across the peaks to the sea and the city in the far distance, my snowboard by my side. Far below me I can see the busy capital and the airport where I landed two hours ago. Krvavec, pronounced Kr-vaa-vets, is pretty small, with only around 30km of pistes, most of which are intermediate reds. The runs are not particularly long, either, with the longest just over one kilometre. But that’s not really the point. They’re fun and challenging enough for a day of skiing, and my lift pass, accommodation, ski hire, food – they’re all easily less than half the price of somewhere like Chamonix. 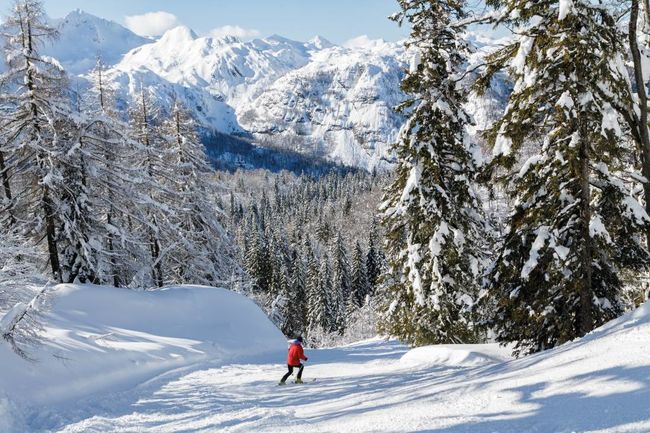 Winter in the city

Heading back to Ljubljana after a day on the slopes means my après ski session is spent in a pub by the river in the picturesque centre, which is a little more sedate than partying somewhere like Morzine or Mayrhofen. The next day, after a croissant and coffee, I set out to wander in the leafy streets of the old town, which lies on the south side of the wide green river Ljubljanica that cuts through the city, dominated by the castle on the hill. This side of the city is where to come to sample traditional dishes, and to hike up to the medieval castle, whose lofty walls offer a panoramic view of the capital spread out below. I wander in the city’s Central Market, drooling at the stalls groaning with homemade cheeses.

I look out from the mountain at the city in the distance, my snowboard by my side

The next morning – my last – I have breakfast in Celtralna Postaja, a versatile hangout that offers cheap buffet breakfasts in the morning and burgers and bumping tunes by night. I’m after one more hit of snow, so I drive through the countryside to Vogel ski resort, around an hour from Ljubljana and next to glassy Lake Bohinj. Alas, just as I arrive a whiteout is rolling in, but I do manage to get out onto the resort’s longest run, a tree-lined descent down the side of the mountain. The resort strikes me as beginner- and family-friendly, with an easy-going vibe and plenty of inviting blue and red runs to tackle. I wish I could stay longer, but in three days I’ve still managed the perfect pocket-friendly – ski and city break. 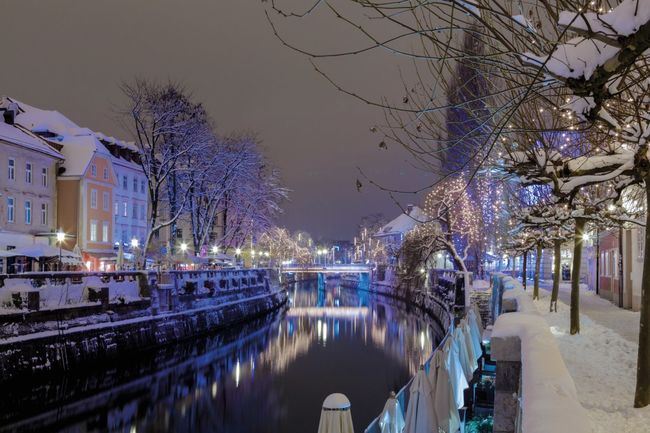 Krvavec is the closest ski resort to a European airport, just 8km from Ljubljana Airport and reached by daily buses from the capital. Family-friendly Vogel is an hour’s drive. Day passes at both are under £30.

Just past the famous triple bridge – icon of Ljubljana – is Trubarjeva cesta, the street that is the ethnic foodie heart of the capital. Lined with restaurants and kooky hangouts, this lively avenue is where the city’s university crowd mixes with tourists – and snowboarders.

The restaurant known as ‘Second Violin’ is famous for supporting people with special needs – and it does slap-up Slovenian fare. Try their rib-sticking štruklji dough balls or the kranjska klobasa (pork and bacon sausage).

Fly London to Ljubljana with easyJet from £54 return.

Krvavec is just 15 minutes by car from Ljubljana airport, or Vogel is a one hour drive away.

Try hearty Slovenian fare such as borek (cheese and spinach pastries) and sausages.

Although there is a hotel in Krvavec resort, it’s also easy to stay nearby in Ljubljana and drive in each day. Oli stayed at the basic but cheerful Hostel Vrba in Ljubljana, £18 per night.